Visalia is called “gateway to the sequoias” and taking a drive east on Highway 198, you’ll soon see why. As you enter the foothills in Three Rivers, you’ll be at the beginning of a tour of three of the country’s most spectacular national parks – Sequoia National Park, Kings Canyon National Park, and Yosemite National Park – creating the National Parks Majestic Mountain Loop.

It might seem a bit ambitious to try and see all three parks in as little as three days, but you can, by following the National Parks Majestic Mountain Loop. You’ll see the largest living tree, hike to breathtaking waterfalls, and take in some of the most impossibly perfect views of the Sierra Nevada Mountains.

Ready to begin? Here’s our suggested itinerary to help you complete the loop, starting right here in Visalia:

Get an early start for a day of spectacular sights at Sequoia National Park – home of the General Sherman Tree, the world’s largest tree. You’ll also find the Giant Forest Museum, and if you’re not afraid of heights – take a hike to the top of Moro Rock. After Moro Rock, take a drive through Tunnel Log – it’s quite the sight to see! After, you can continue to Crescent Meadow for some beautiful trails or turn around to continue up General’s Highway.

After a long day of exploring, grab some ice cream in Three Rivers at Reimer’s or Three Rivers Yogurt. Then come back to kick up your feet in your guestroom at The Darling Hotel. Take a nap and then head up to Elderwood for a rooftop dinner with views of the beautiful Sierra Nevadas you just spent the day with.

On Day 2, head back onto General’s Highway (HWY 198) to Kings Canyon National Park to see the General Grant Tree (the world’s second largest tree) amidst the towering sequoias in Grant Grove. From there you can take your picnic basket to scenic Zumwalt Meadow to relax before taking on Roaring River Falls trail, which features a waterfall and is good for all skill levels. Round out your day with more trails at “Road’s End”, or head back to The Darling to explore Visalia before heading to Yosemite in the morning.

Finish your mountain loop tour in one of the most famous national parks in the world. Yosemite, known for towering Bridalveil Falls and the granite cliffs of El Capitan and Half Dome. On Highway 41 you’ll find one of the most photographed vistas in the world. Take in a panoramic view of Yosemite Valley, including El Capitan, Half Dome, Sentinel Rock, Cathedral Rocks, and Bridalveil Falls. There’s limited parking, but don’t miss the chance to marvel at the magnificent views.

*Reservations are required to enter Yosemite during peak hours. Make your reservations here. 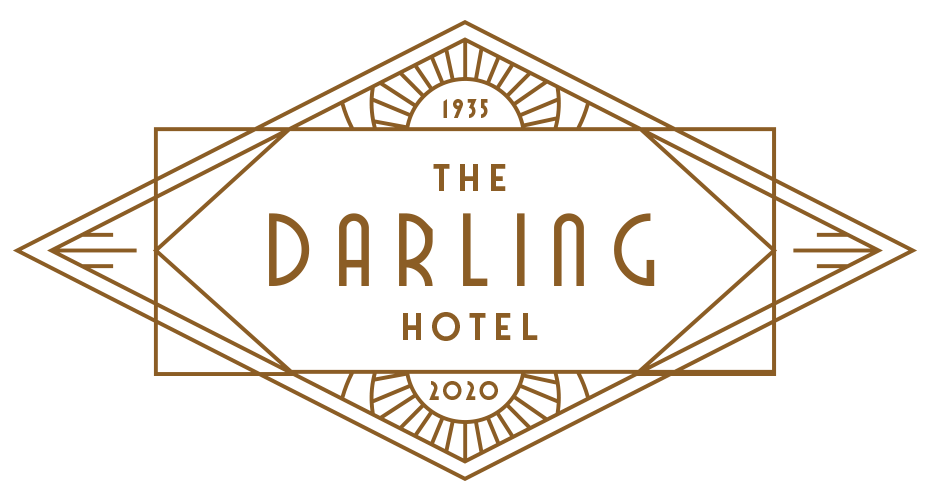 The Darling Hotel is a boutique hotel in Visalia California near Sequoia National Park and within easy walking distance of the Visalia Convention Center. The hotel features Art Deco decor and a rooftop restaurant for fine dining.
The Darling Hotel is an easy walk to downtown Visalia with shops, eateries, and entertainment. Nearby Central California cities for this hotel include Fresno, Tulare, Exeter, and Hanford