A Mid-Century Gem: The Darling Hotel

“Sequoia National Park is 56km from Visalia and its 1.2 million annual visitors provide a steady but transient trickle of traffic downtown. In July 2020, a new hotel gave them a reason to linger a little longer.

The Darling, built in 1935, is housed in the former county courthouse and kept its original terrazzo flooring and prewar façade. But when the current owners took it over it had been abandoned for almost 15 years. “This place was in really bad shape,” says co-owner Matt Ainley from inside the lobby. “I’d driven by it my whole life saying, ‘Too bad it’s not very well taken care of.’” Ainley, a civil engineer by trade, had no previous hotel experience but was driven by a desire to preserve a unique piece of Visalia’s history and restore it to its former art deco elegance.

The rooms boast 3.6 metre-high ceilings and there’s an outdoor pool in which to while away a lazy afternoon. But the showstopper is the rooftop bar with unobstructed views towards the snow-flecked sierras. It’s a stark contrast to the building’s past but from a local’s point of view, it’s undoubtedly an upgrade.

The 32 rooms at this mid-century gem pay tribute to the building’s former life as the Tulare County courthouse; head to the rooftop bar for stunning views of the Sierras.” 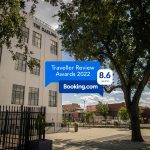 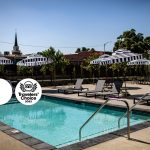